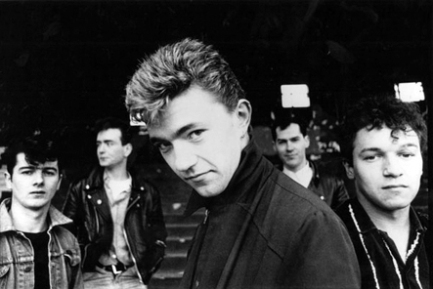 If Sammy Hagar was the Voice of America (and why on earth would he title a long-playing album released under his own name just that if he wasn’t?) then Easterhouse was the Voice of Great Britain. Hagar’s America was apple-cheeked, tow-headed, red-blooded youth, Chevrolet Corvettes, Louisville Sluggers, luscious “American thighs” and ice-cold Budweiser. Easterhouse’s Britain was weedy, spotty, bedraggled communist-sympathizing proles, cars named after jungle cats that looked nice but never ran correctly, cricket bats, pointy-nosed “birds” and warm beer that claimed right on the can to be “bitter.” None of that stuff traveled well, so if you ever wondered why this band never sold as many records in the States as other imports like Bryan Adams (Canada) and Men at Work (Australia), now you know why. The Exalted Lady Princess Diana Spencer of the House of Thorpe was fine, Easterhouse, not so much.