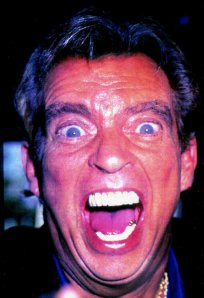 He came out of nowhere and captured the country’s attention almost overnight.  He sported pleated pants, bright red socks, kiltie tassel loafers and a three pack an hour cigarette habit.  A frat boy all grown up into a “manhood” of intolerance, jingoism and unbridled, loud-mouth aggression. Up until his debut even the most irascible TV talking heads had striven to present themselves with at least a sheen of civility. Morton had about as much polish as a sand-blasted cinder block.  His was the Donahue-style talk show set recast as a modern-day bear-baiting pit.  Morton’s bookers served up an endless parade of liberal straw men and women willing to sit on his stage and be verbally berated, assaulted by carefully aimed clouds of secondhand smoke and maybe even tipped out of their chairs by the man. All while the audience howled blue murder like a bunch of villagers with pitchforks and torches. It made for great television, but it couldn’t last. Shouting matches quickly become exhausting and soon even his own fans were losing interest.

Morton had one last throw of the dice but it came up snake eyes. The mirror in the bathroom at San Francisco Airport betrayed him, and the backwards swastika on his face that had purportedly been applied by crazed skinheads brandishing magic markers and hairdressing shears was eventually revealed to be the emblem of a desperate act of self-abuse. So the whole world laughed at him. And once you became a laughingstock, you certainly aren’t going to keep earning a living as a bully because bullies need fear and intimidation to succeed. So that was it.