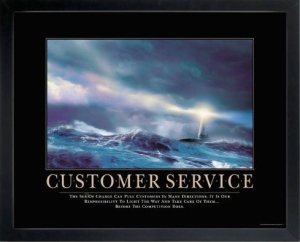 It was the heart of the decade (1985) and from the heartland came a company selling heartfelt messages that touched the heart of everyone who saw them. Their framed pictures were the perfect tonic for a generation enervated by the rough and tumble 70s. Majestic purple mountains, fierce bald eagles, towering skyscrapers, even a common mutt dog leaping in the air to catch a bright red frisbee–Successories ability to pair striking images with pithy bromides to create lasting objects of inspiration was unparalleled.

The company flourished in the 80s and at one point even had stand-alone stores in malls across the nation, but they ran into a bit of trouble once “grunge” entered the pop culture scene in the early 90s. The princes of that slacker ethos had no use for Successories’ motivational corporatespeak. In fact, it enraged them. Kurt Cobain would often burn these on stage and then put out the fire with, yep, you guessed it, his own VD-tainted urine. Eddie Vedder threw snowballs at the companies headquarters every single time Pearl Jam passed through Illinois. (Except of course, when they toured in the Summer!) Layne Staley snorted a huge line of heroin off the glass of a 24″ X 36″ Successory one time and then put his combat boot right through the middle of it before falling over and nodding off for 16 hours.  The guys from Screaming Trees would turn their heads and look away every time they passed one in the halls of Epic Records. Candlebox even addressed the company directly in a song, and it wasn’t exactly a love letter. Although “Successories Soul Sucker” was never actually released due to the group being dropped by their label.

All this negativity took its toll and by 1995 the company was reeling. And yet the workers there took their very own advice and refused to lose–they stayed positive, worked hard and ended up signing a great deal with the SkyMall catalog. They persevered, unrelentingly upbeat and unfailingly sincere to this very day. It’s comforting to know they are there.