I remember shaking my head in disbelief when I saw the trailer for this movie. They were going to make a sex comedy featuring two of my favorite actresses– Tatum O’ Neal and Kristy McNichol—based on a race between the two to lose their virginity? Please, where does the line for tickets form? Tatum had already “struck me out swinging,” if I may indulge in some quite appropriate baseball parlance, as the ace tomboy pitcher Amanda Whurlitzer in the 70s classic The Bad News Bears. That bob, those freckles, that already ragged beyond-its-years voice, that nasty curveball. You couldn’t help but love her. Kristy McNichol, a brooding brunette from the ABC-TV drama Family, was more the girl-next-door type, if the girl next door happened to be named after a dog. (Buddy, in case you’ve forgotten). Naturally, since it was the early 80s, the role of feather-haired cherry-buster went to Matt Dillon, because, well, that was what he did back then.

My personal expectations for this movie were so high that the end result was bound to be disappointing. It turned out to be a fairly standard summer camp movie and of course it’s the poor, tough girl (Kristy) who ends up surrendering to Matt on some dirty inflatable raft behind a tool shed, while the rich girl (Tatum) leaves camp every bit as intact as when she’d arrived and in better clothes to boot. I guess the filmmakers were trying to teach the film-going public some kind of lesson about socioeconomics and sexuality, but it’s all pretty much lost to me now. 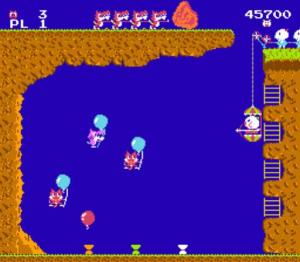 Forgotten by most, beloved still among those who remember, Pooyan was one of the most unique and challenging video games ever created. Legend has it that Donkey Kong Champion Billy Mitchell once spit a huge mouthful of Sunkist Orange Soda  on one of these machines when someone asked him to give it a spin, but he’s always been jerk, hasn’t he? It wasn’t “manly” enough for him, apparently. Who was he trying to kid? You play video games, dude—you’re not exactly a smokejumper!

I can proudly say that it is in my personal top five video games of all time. And honestly, Pooyan doesn’t need some blog entry by the likes of me to rehabilitate its image. Those who know, know. I have it on good authority that both the famous Japanese actor Pikachu and a certain red-hued Teletubby named Po, both consider this a favorite. Better company to be in, I am certain, than some 50 year old mullet-headed guy who still carries a comb in his back pocket. Yeah, that means you, Billy…

Pooyan featured pigs and wolves. The pigs were adorable and good, the wolves were kind of adorable but very bad. They kidnapped a few unlucky porkers but wanted more, so the pigs had to defend themselves by rigging up an ingenious gondola contraption, from which one of them could shoot arrows at the wolves, who used the more primitive method of hot air balloons to get at the pigs. An aerial battle royale! Pooyan was pretty much ignored by most arcade junkies of the day, which meant that if you did like it, you never had to wait around for the machine to clear. This was a good thing, because it was a lot of fun!

On Dinosaur Jr.’s first album they desperately plea for listeners to “Forget the Swan” but try telling that to a teenage girl in 1981. If she cared at all about keeping up with her classmates in the fashion department, these jeans, emblazoned on the fifth pocket with a swan as golden as King Tut’s mask, were standard issue. I’m not sure why “poor little rich girl” Gloria preferred to loll around on the floor with fabric shears and bolts of denim instead of gardening or sitting for tea with guests like she should have been doing, but anyone who appreciated a shapely derriere back then was certainly glad for these eccentricities. Heck, it may be that Gloria herself appreciated a nice ass as much as the next fella. In any case, the jeans fit well.

Each pair received Gloria’s “stamp of approval”—her actual signature on the right rear pocket rendered in that fabulous golden thread. This logo was so shiny and bright that some were sorely tempted to read it with their fingers like Braille at times, which usually resulted in a justified slap to the face. The kids back then called it “goosing”–today it would probably be labeled “sexual assault.”

Since these jeans were made only for girls, they could also be used as a unique instrument of punishment. If, say, you had a son who was getting bad grades, you could force him to wear a pair of these to school every day until his marks improved. His classmates would take care of the rest.

Gloria was the undisputed doyenne of denim for a number of years, but fashion is fickle, and by the mid to late 80s, these jeans had been forgotten as the teenage set went crazy for those weird high-waisted floral print jeans made by any number of labels. Clothing is still made in her name to this day, although the company’s products now seem to be shipped directly from the factory to the clearance racks at Burlington Coat Factory and Ross.

Sometime in the mid 80s, a dark-eyed, raven-haired Amazon warrior came rocketing out of South America on a black and pink Honda CBR. Her arrival on the scene sent shockwaves through the sport of women’s tennis. When Gabriela emerged from the locker room in the fourth round of the 1985 Lipton International in Delray Beach her opponent Carling Bassett burst into tears, immediately defaulted, and fled across the peninsula to become a statistician for her father’s USFL football team, the Tampa Bay Bandits.

Carling was only the first. Almost every player on the WTA quickly fell victim to this Tacchini-clad Goddess. Hana Mandlikova leapt off a pier in Hilton Head, South Carolina, and though rescued by some quick-thinking dolphins who helped nudge her onto a passing skiff, she never picked up a tennis racket again. Tracy Austin tore her pigtails out with her bare hands and then shaved off what was left. And she wasn’t the only one–in a strange and deluded attempt at emulation, Andrea Temesvari dyed her famous blond locks crow-wing black and changed her name to Gabrieli Sabatina. It didn’t fool anyone. Within a month, she had shaved her head as well. (The women’s tour was beginning to look like the Manson Family by this point!) Helena Sukova quit tennis, had sexual reassignment surgery and spent the rest of the decade as a spokesman for Wrangler Jeans, who almost went out of business thanks to her bizarre series of television commercials. Andrea Jaeger is still in counseling and it’s 2014, for goodness sake.

There were other casualties but there is no point in dragging them out into the light. The vanquished know who they are. The point is that Gabriela reigned as the Queen of Tennis back then and everyone else was that infamous and oft-cited “chopped liver.” These larger-than-life beings appear once in a generation if we are lucky. I consider the unopened, autographed 100ml box of Gabriela Sabatini Eau de Parfum my most cherished possession and will most likely be buried with it.

“This is the 80s,” says Valerie Perrine to someone over the phone. “Things are different now.” Right she was and one of the very first things that the new decade did to prove its independence was to toss that glittery emblem of the cocaine and free love 70s—DISCO—right on the trash heap. And this movie was one of the first casualties, grossing an anemic 3 million dollars at the box office only 36 months after Saturday Night Fever raked in $240 million. You gotta strike while the iron’s hot.

Still, 30+ years later this movie is a cult favorite. What can you say about a flick whose most accomplished actor is Bruce Jenner? Hell, his cut-off jeans shorts alone deserve a place in the Smithsonian. He exudes a genuine decency and likability throughout, and although the “love scene” between him and Perrine seems to be documenting the naive fumbling and nervous joking of two 14 year olds rather than the unleashed passions of full-grown adults, it fits in with the upbeat, child-like sweetness of the movie as a whole. Steve Guttenberg, on the other hand, only manages to shoot off beams of anti-charisma like some Studio 54 laser show run amok.

The Village People themselves seem like pretty cool guys, though, and although none of them really get to do much that is blatantly gay beyond prancing around in outrageous costumes, there’s no denying that Glenn Hughes’s Leatherman makes a great role model.

The script is one of the worst ever written, full of frivolous exchanges that push the narrative forward in ways most scriptwriters would never have the guts to think of. Some examples:

Jack: I don’t have anything to write my lyrics on, we ran out of paper.
Samantha: Use a paper napkin
Jack: Oh, right, good idea.

Samantha: Felipe, could you bring the rainbow wheel out back for me?
Felipe: Sure!

Felipe: Ok see you later, I gotta go shower and get ready to go to the club.
Jack: Ok, I’ll see you there.

In its defense, the movie does drag itself out of its morass of general incompetence for 4 brilliant musical minutes when the band perform their hit “YMCA” inside that very building itself. C’mon, name me one other PG-rated movie where you can see a bunch of soaped-up ding-dongs and Valerie Perrine’s cross-eyed floppies in rapid succession? Groundbreaking!

It was the heart of the decade (1985) and from the heartland came a company selling heartfelt messages that touched the heart of everyone who saw them. Their framed pictures were the perfect tonic for a generation enervated by the rough and tumble 70s. Majestic purple mountains, fierce bald eagles, towering skyscrapers, even a common mutt dog leaping in the air to catch a bright red frisbee–Successories ability to pair striking images with pithy bromides to create lasting objects of inspiration was unparalleled.

The company flourished in the 80s and at one point even had stand-alone stores in malls across the nation, but they ran into a bit of trouble once “grunge” entered the pop culture scene in the early 90s. The princes of that slacker ethos had no use for Successories’ motivational corporatespeak. In fact, it enraged them. Kurt Cobain would often burn these on stage and then put out the fire with, yep, you guessed it, his own VD-tainted urine. Eddie Vedder threw snowballs at the companies headquarters every single time Pearl Jam passed through Illinois. (Except of course, when they toured in the Summer!) Layne Staley snorted a huge line of heroin off the glass of a 24″ X 36″ Successory one time and then put his combat boot right through the middle of it before falling over and nodding off for 16 hours.  The guys from Screaming Trees would turn their heads and look away every time they passed one in the halls of Epic Records. Candlebox even addressed the company directly in a song, and it wasn’t exactly a love letter. Although “Successories Soul Sucker” was never actually released due to the group being dropped by their label.

All this negativity took its toll and by 1995 the company was reeling. And yet the workers there took their very own advice and refused to lose–they stayed positive, worked hard and ended up signing a great deal with the SkyMall catalog. They persevered, unrelentingly upbeat and unfailingly sincere to this very day. It’s comforting to know they are there.