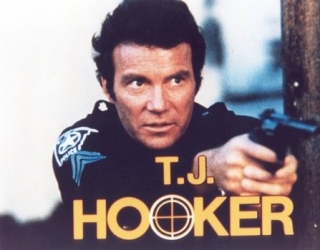 After the end of Star Trek (the actual television series, not the phenomenon, which will never end) William Shatner, or “Shatty” as he likes to be called, was in a bit of a bind. He’d been typecast as Captain James T. Kirk. so it was hard for him to land substantial roles–he ended up wandering through the 70s in something of a daze, doing occasional guest spots on schlock like Match Game and The $25,000 Pyramid.

In 1982 he was finally given a “second life” via the television show T.J. Hooker, and considering that now, in 2014, he’s on his 11th or 12th reincarnation, taking this role was definitely the right choice.

These days, Shatty struts and frets across the world entertainment stage as a jocular figure of fun, but his character T.J. Hooker was one dead serious hombre. He was an angry cop, his asperity supposedly fueled by the death of his partner at the hands of some scumbag criminal, but I always suspected it was all because he bore the burden of a surname that was an American English colloquialism for a streetwalker and a first name that perfectly rhymed with the slang term for a depraved oral sex act. In any case, he brooked no guff as he molded the fresh-faced new recruits down at the Police Academy into cyborg-like killing machines as well as finding the time to patrol the beat and collar a few detestable felons every episode. He also leaped onto a LOT of moving cars, buses, and even freaking planes, like some blue-suited half human/half mountain lion.

Joining him on his crusade was Adrian Zmed, whose career might have gone farther had he added a vowel or two to his last name. Also along for the ride was Heather Locklear, who was about as believable an inner-city cop as Paris Hilton would be playing the Vincent D’Onofrio role on Law and Order: Criminal Intent.

Despite T.J.’s almost constant poker face, it was all pretty groovy–they even got Leonard Nimoy to come aboard for an episode and play Hooker’s former partner and bestie who turns into a berzerk vigilante when his daughter is assaulted by a sexual predator in a Fonzie jacket. Near the end, Captain Kirk and Mr. Spock trade punches like Hagler and Leonard!