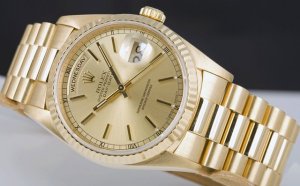 This timepiece, especially the gold version, seems pretty emblematic of the whole Yuppie/Greed is Good aspect of the 80s. It seeemed like every leveraged buyout artist–the guys who had quickly come to be regarded as the new “Masters of the Universe” by the mainstream press–sported one.

Fakes of this watch abounded on the UGA campus and I remember people constantly poring over the faces of fellow classmates’ timepieces to see if the second hand ticked or swept. Ticking was fake, sweeping was real, the consensus went. Either/or, you can pretty much rest assured they were ALL fake. Honestly, did the people who used to swagger around with these things dangling on their wrists really believe that other people were going to believe that parents intelligent enough to earn that kind of money (and there were plenty of students from just that type of background) were going to send their kids off to college to live in an almost completely unsecured dormitory with a $22,000 gold watch their irresponsible, drunken offspring could leave sitting on top of their metal dresser while they walked down to the end of the hall to take a shower? I mean, really now.

I remember one joker on my dorm floor who used to go around insisting that the company’s name was pronounced Rawl-ex, like Rawlings, the famous maker of baseball equipment. I think someone finally punched him in the face and that was the last we had to hear about that. I do think it is a pretty good gauge of the 80s much-maligned “materialism” that a bunch of 18-22 years olds attending their state university, most with just enough pocket money to buy a 3 dollar pitcher of beer every night, talked about these watches incessantly.