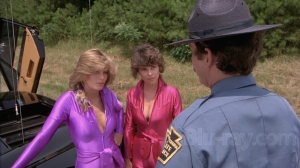 What could be more fun than to watch dozens of B and C-list movie stars cavorting on a cross-country death ride to meet up in Las Vegas to worship at the feet of their master, The Walkin’ Dude—Mr. Randall Flagg? Er, wait a minute I think I’m getting this movie mixed up with a BOOK by Stephen King called The Stand.

It was a late 70s Saturday night broadcast of It’s a Mad, Mad, Mad, Mad World that pretty much hooked me on madcap cross-country ensemble comedies, but unfortunately for me, Hollywood never really produced too many of them.  Enter Hal Needham and Brock Yates. They had a dream of doing a movie loosely based on a real coast to coast race known as the Cannonball Baker Sea-To-Shining-Sea Trophy Dash and they were lucky enough to have a good pal in Hollywood to help them along, and not just any good pal, but the #1 box office attraction in the land. His name was Burt Reynolds and he got the thing green-lighted with probably about as much effort as it took him to undo Loni Anderson’s bra every night. The movie did so well that three years later they produced a sequel, titled, logically enough, Cannonball Run II.

Herewith in ascending order of magnitude is a brief look at some of the stars who were involved in either one or both of these uproarious films:

Jimmy the Greek—Way, way before the nasty cesspool of Steubenville, Ohio made a name for itself around the world by institutionally covering up a heinous sexual assault, it much more quietly went about the business of producing upstanding citizens like this guy and Dean Martin. I think I like the old Steubenville better.

Jackie Chan—Speaking of Ohio, in the hopelessly xenophobic General Motors-centric Ohio town I grew up in people actually threw sodas at the screen whenever this guy appeared. Because they thought he was Japanese.

Jack Elam—A superlative character actor, but this character was a disturbing one to watch. I hope for the sake of his immediate family he didn’t “take this role home with him” as some actors claim to do.

Burt Convy—Nowhere near as cool as the movie of the same name, which starred Kris Kristofferson as “The Rubber Duck”

Terry Bradshaw—The guy called every offensive play (for both teams!) in four Super Bowls and never lost a one.

Mel Tillis—I always found it odd that a man could be so richly rewarded for mocking people (albeit including himself) with speech impediments, but people weren’t so uptight about things back then.

Adrienne Barbeau—Maggie from Escape from New York. The damsel in distress from Swamp Thing. How anyone with a pulse could not want to eat her up like a super-sized hot fudge sundae has always been one of life’s great mysteries.

Telly Savalas—He brought a gravity to his role as Hymie Kaplan that no one else could have delivered. Jesse Jackson later mentioned by name how impressed he was with this character and got torched for it.

Dom DeLuise—The beloved Falstaff of many a Burt Reynolds and Mel Brooks movie. If he ever managed to do or say one thing that made me laugh I certainly can’t remember it. But it seems like he was a kind soul.

Peter Fonda—“Crazy Larry” will always be an A-lister in my book.

Dean Martin—Vindicated in the 21st century as quite possibly the coolest cat who ever lived, but in 1981 he was considered to be little more than a drunken buffoon stuck fast in an era that had long been passed by. I can only imagine the fun Dean and Jimmy the Greek had on set reminiscing about their childhood days running errands all across southeast Ohio for their mentor “Dom the Guppy.”

Roger Moore—People always say he was the “worst” James Bond but I thought he did just fine. He used to ski in Gstaad with William F. Buckley and David Niven! What did the people constantly tearing him down ever do? Bumper ski down some potholed street by grabbing onto the back of some rusted-out Pontiac Bonneville? I thought so.

Shirley MacLaine—I think this is about the time people stopped taking her seriously and she just took the ball and ran with it.

Burt Reynolds—Although these movies did well, the sun was setting on Burt’s career around this time and gallivanting around like an idiot with a bunch of other idiots didn’t help things much.

Frank Sinatra—And Frank, oh yes, Frank. Mr. Sinatra lived so passionately for the champagne and “classy broads”—it’s a shame his last ever movie role was a spectacle that was roughly the equivalent of having a shaken-up can of warm Blatz dumped over his head while in the act of having unprotected sex with a $5 chickenhead hooker. On a public street. Nice knowing ya, pallie!