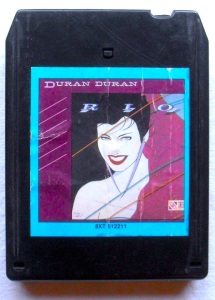 From our technologically-advanced perch here in 2014, 8-track tapes appear to us as a monstrous “bad memory”—a ridiculous object worthy of nothing more these days than being dragged out for a good laugh at some 70s retro party hosted and attended by yuppies of a certain age unabashedly smug about their ability to carry around their entire collection of Hootie and the Blowfish songs on a media player no bigger than the head of a pin. And while it is true the 8-track tape is more of a 70s phenomenon than an 80s one, the fact is this red-headed stepchild of music media managed to avoid extermination until 1988, primarily due to its continued production and sale via the Columbia House Record & Tape Club. Certainly you remember that highly selective, not-so-secret society based in Terre Haute, Indiana? For just a single penny new members would receive 13 cassettes or LPs or CDs or, yes, 8-track tapes, but these members would then be beholden to the club for the rest of their lives or at least until they bought a certain number more of musical recordings at the club’s regular price of $8.98 plus $14.95 “shipping and handling.”

Although pretty indefensible as a medium for high-fidelity musical playback, there was something solid and permanent-feeling about 8-track tapes. They were fairly big and bulky. The clunk between tracks resonated about the listening room with the significance of a Mercedes-Benz S Class door slamming shut. Plus, listeners had the added bonus of having all the songs rearranged from the order the artist originally intended. Even better, who didn’t enjoy hearing a few moments of dead silence IN THE MIDDLE of a cherished song followed by that familiar ker-chunk, and then the abrupt continuation of the song. Best of all, a lucky few with money enough to install a Sparkomatic or Kraco 8-track tape player in their car could take their tapes on the road for some truly mobile jammin’! Although if you left them on the dashboard for too long the label would fade into illegibility and the plastic case warp like a slice of melted Provolone.